The Orange Dhoti by Maya Tiwari

The Orange Dhoti by Maya Tiwari 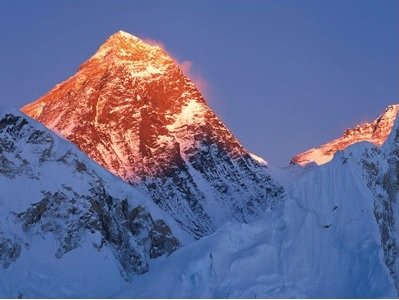 On my first trip to the Himalayas I was catapulted into my cognitive state quite frequently from both the thinness of the oxygen deficient air and the visual beauty of the snowy peaks, the cobalt skies and the incredible Ganges River trickling down from the mast of the highest peak. Historic site of the ancient seers and sacred lore of the Vedas, the Himalayas stripped the senses of their routine experiential perceptions and hurl them face to face up against the creator and the creation.

After timeless days of journeying, I could no longer sustain my usual stamina, resorting to crawling on hands, knees and belly before finally giving in and hiring a mule to carry me. Littering the dirt and rock cornice which winds its way to the very top of this majestic mountain, were vendors serving “savories and chai” sadhus dues smeared with ashes and practicing oblations in tiny shacks, and men and mules carrying luggage and devotees on their back. Time was very far away, and I was light-years away from the perceptions of time and space living. Saturated by the sound, site, smell, feel and taste of God, I was awakened to my cognition through most of that journey. Even now, I sustain it fully.

Every morning, the sun gleamed its bright heat to warm the crisp, cool air. On one particular morning I knew I would never again be the same. The very sound of the day had a finer resonance.

On this particular journey, I was accompanied by one of the swamis (a Vedic monk) and a fellow female student from my teacher’s ashram in Rishikesh, located in the foothills of the mountain. My female colleague had made this pilgrimage many times before. On this occasion, however, she was unhappy because she disliked the Swami was escorting us, a joyful and cherubic being, whose company I felt honored to have.

My friend’s intense dislike of her companion and her constant bickering drove the Swami ahead of us. Even so, I was amused by the extreme state of realities that existed on that glorious day. For me, there was that one’s full cognition of all the splendors of creation, literally hanging from every corner and crevice of the hills through which we journeyed, while in the other reality the usual routine norm, I had to struggle to remain attentive. The angry exchanges of words between my friend and the Swami created in me the obligation to keep the peace. Wrenching myself away from the very inhalation of majestic creation and my blissful state, I attempted to referee what had by then become a crowd-gathering event. Before I could engage their attention, the Swami threw himself on his buoyant belly, in full prostration at my friend’s feet, and then, with great rapidity, arose to mount his mule. In his haste, his orange dhoti, the cloth that wrapped his body, unfurled and flew into the hills. Suddenly, there was a stupendous vision of a rotund and almost naked monk in full flight after his dhoti.

The path of cognition is often fettered with astounding humor. In crisscrossing between the experiential routine state of reality and the blissful state of cognition, that day I realized that living is a very humorous, if not always harmonious, process. When all else fails, try exercising humor.